Definition: Children can be present in a conversation but should not speak, particularly when they are around adults. It alludes the child’s ignorance to adult manners. This proverb has its origins in the religious culture of the 15th century, where children, particularly young women, were meant to stay silent unless spoken to or asked to speak.

When I heard this line at our session, it has affected me in so many ways. It triggered that frustration

To be honest, many adults have no manners and know nothing at all. Children sometimes know best. Their innocence and honesty of just being themselves are the things that I wish adults should be – to be open, curious, and accepting of the world around them. It struck chord that even a long time ago, children lived in the shadows, which is very similar to how undocumented migrants feel, which leads me to the article I wrote on November 2015:

“Everyone has his or her own story, so I have no right to say what is best for Filipinos coming to Ireland.  But even on my 15th year of being undocumented and the opportunity to go home after I have finished paying for my children’s college tuition, I chose to stay because I want to continue to support my fellow undocumented friends on the campaign to be regularised.” Jayson Montenegro, Founding Member-Justice for the Undocumented

There are believed to be up to 26,000 undocumented people from around the world living in Ireland, the vast majority of whom are working and they are believed to have between 2,000 and 6,000 children. In 2010, Migrant Rights Centre Ireland (MRCI) through Justice for the Undocumented (JFU), proposed the Regularisation Scheme, which is a once-off, time-bound opportunity that will help people illegally in the country to regularise their status. On June 2017, the Oireachtas Committee on Justice and Equality urged the Department of Justice for this short-term window of opportunity. Although it has positively responded by opening the Student Scheme that may regularise 5,000 migrants, MRCI expressed concern that the 3-month application period was too short given the confidence needed for those affected to come forward, the eligibility criteria was too restrictive, plus the upfront €700 feet was a deterrent. 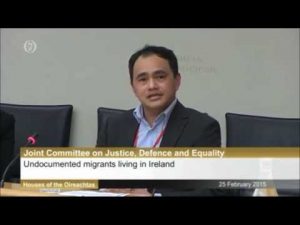 I did not anticipate to have quite an emotional journey with Jayson as he recounts his trials and accomplishments in Ireland.  I silently joined him shed a tear or two as he shared his remarkable story. Unfortunately, the battle is not over and he continues to sacrifice and persevere for the good of his family and his fellow undocumented migrants, who, for many years, long for acceptance and respect from the Irish community.

Jayson was already active in politics back home from 1999 to 2004.  He started as a Councilor and then became the Barangay Captain of Pajo, Alfonso in Cavite. (A BarangayCaptain is the highest elected official in the smallest administrative divisions of the Philippines.)  But after struggling with the challenges of Philippine politics, he decided take a leave of absence and move to Ireland to join his Uncle Narding who has been residing in the Emerald Isle for 40 years.

In 2004, Jayson and his wife Tess came to Ireland as tourists.  They left their three children – now aged 25, 24 and 21 – under the care of his parents and Tess’s sister in their home in Cavite.  They entered Ireland with 3-month Tourist Visas which were extended for a month.  They have not requested for an extension since.

Tess started working as a nanny while Jayson worked as a maintenance staff of a building company in Dublin. It was a very difficult and dangerous job for Jayson because he had to unclog a large septic tank full of human waste.  He recalls crying in the cold and dark chamber with no health & safety gear, treading slowly in waist-high stench and pushing himself to keep on going for the sake of his children. “Paulit-ulit kong sinabi sa sarili ko, “Para sa anak ko ito…Para sa anak ko ito…” (I kept telling myself “I have to do this for my children…. I have to do this for my children….”) He was promised a work permit but unfortunately this was not granted, so he carried on looking for other sources of income.  A fellow Filipino who worked as a builder gave him the opportunity to help in a restaurant project but he never paid him for his hard work. It was Christmas season at that time and Jayson had no money to send to his children back home. He painfully decided to charge this to experience, and up to this day he continues to be friendly with his kababayan(fellow Filipino), who sadly has now forgotten the money he owes him.  That unfortunate incident turned out to be a blessing in disguise when he found a job as a care worker for a kind-hearted family in Limerick where he looked after an elderly man named Philip who was suffering from Alzheimer’s.  Philip’s daughter Rachael very kindly supported Jayson in getting a qualification in Business Management. She was so generous she even bought him a table that he can use to finish his thesis and other academic requirements while they took turns looking after her father. When Philip passed away, he looked after two other men, Richard and then Hugh, who have both passed away. He is now working part-time as a Carer every Friday.

Since 2010, Jayson and Tess work as part time care workers in Dublin and are still undocumented. Jayson’s passion for helping undocumented migrants in Ireland started in January 2009 when a friend told him about an upcoming campaign. Jayson kept on attending sessions on migrant cases until Edel McGinley, who was the Community Work Coordinator of the Migrant Rights Centre Ireland (MRCI) at that time, invited him on April 2009 to join a discussion on migrant problems.  Jayson and four others (a Brazilian, Sri Lankan, Mongolian and American) attended that first session.  Jayson recalls everyone being so scared, including the MRCI who were unsure where to start and could not guarantee their safety, so they all feared incarceration or deportation. But despite the uncertainty, they continued to work out a plan on how to implement their campaign.

It was only in October 17, 2010 when they had the opportunity and the courage to be heard.  They were invited to the United Nations Day for the Eradication of Povertyin Dublin where organisers requested a representative from MRCI’s undocumented migrants group to share his or her story.  Everyone was reluctant apart from Jayson, who did not only want to help his fellow migrants but was also desperate to go home.  He raised his hand, got up on stage and left everything in God’s hands.  He faced thousands of people including influential public figures like Christy Burke, the Lord Mayor of Dublin, and other established interest groups.  Jayson was so nervous he talked so fast.  He got even more uneasy and distracted when he saw the roving Garda (the police force in Ireland) who were securing the event. When he finished, he quickly got off the stage shaking and fearing for his life.  But instead of being restained, he was comforted by warm embraces, encouraging handshakes, and pats on the back for his bravery and determination.  You can feel his emotions as you listen to his testimonythat moved many on that commemorative day, and thousands more who heard and read his story on countless occasions after. (Here is the transcriptof his testimony.)

Jayson has since been the founding member of Justice for the Undocumented (JFU)campaign group which the MRCI established in line with its regularisation scheme proposal in response to the growing numbers of undocumented persons. After his testimony, the MRCI wanted to get more members involved so Jayson went to a gathering of Filipinos to talk about the campaign, but no one seemed to be interested.  Only one or two listened intently but the others looked away and did not even pay attention, which Jayson found very frustrating and demotivating.  Little did he know that the fear factor played a big part in their reaction.  Undocumented migrants often live in the shadowsunder tremendous stress and constant fear of deportation.   So in reality, the many Filipinos in the party who were in the same situation as Jayson were eager to know about the campaign, but only had the confidence to come forward later on when they were more certain about their safety.

JFU now has 1400 undocumented members and, with allies and supporters, is campaigning for the introduction of a regularisation scheme which would allow over 20,000 undocumented migrants – majority of which are Filipinos (33%) – the chance to come forward and regularise their situation. Jayson made history by speaking on Government Record to the Justice Committee on February 25, 2015 when MRCI presented its proposal.  He shared his experience working for 6 years in maintenance cleaning and painting which he aptly described as “a 3D job – dirty, difficult and dangerous.” He also said he would love to see the same political leadership of the kind President Barack Obama has shown in the US.  Here is the videoand transcriptof the meeting.  Jayson is now officially in Irish government records.

Jayson continues to campaign for the regularisation scheme by attending events, vigils, marches, newspaper and radio interviews, and conferences.  He has recently joined a political party that supports his vision. And each time he attends an event, he never fails to fear for his life.  He can never forget the time he marched and campaigned in front of Parliament and his heart stopped when a Garda guarding the gates called him over.  He reluctantly obliged thinking he was in trouble, but as he waited for the man to give a barrage of telling-off words and clamp metal cuffs on his wrists, the Garda gave him a big warm hug and greeted him a “Happy Christmas!”    Jayson was sobbing (as so I) as he recounts that the genuine love he felt from such an intimidating man of power truly brought him to tears.

This will be his 15th year away. He missed his father’s funeral, plus countless other birthdays, celebrations and milestones while being away from his family. Jayson’s heart breaks whenever his youngest son asks him when he was going home or when he constantly says he doesn’t know his father anymore. “Sino ka, Tay? Hindi na kita kilala.”Who are you, father? I don’t know you anymore.” These are moments when you learn to appreciate what you have, no matter how simple they are, because somewhere out there, not only in Ireland, we have kababayanswho are not having it easy.  Like Jayson, thousands of undocumented migrants are longing for one legal document that would put an end to their woes.  One piece of paper that would hopefully bring them home this Christmas.

Paperless, faceless, voiceless…. This is not the way things should be. Everyone from all walks of life should be treated equally, be given a chance to be heard and should be treated with respect.  Again, it goes back to the things we are taught as a child.  “Be nice to others.” The basic rule in life.  If we all find that child in us – the fearlessness and willingness to learn and accept others, surely we will be in a better world.

Integrating is a two-way process between the host country and migrant community.  Efforts have been made by the migrant community in reaching out and sharing their culture to the Irish community.  Likewise, the Irish government have initiated projects in welcoming new communities.  These efforts should be pushed beyond implementing projects but also motivating individuals on both sides to have the genuine interest to learn about each other’s heritage.