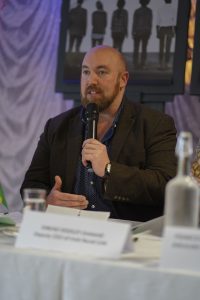 “No matter the blood, the skin, the tribe, the nation, we are one people and one world.”

====
There are so many groups and societies in our Ireland today and living in a society that has for so long been on a border has given me appreciation of what ‘frontier living’ is like. A life where two worlds and two ideals meet, sometimes in peace and sometimes not. But living a border existence makes people more resilient and stronger to their communities than those in the comforts of capitals or far from the question of who they really are and what is ‘culture’. It made me question.

My questions, my travels have led me to other borderlands and other conflicts, from the post Civil War Nepal, squeezed between the Indian and Chinese states, to the border or Thailand and Myanmar where war still raged and I worked in Eurasia’s second largest refugee crisis, driven mainly by the misunderstanding, fear and hatred of cultural difference. I’ve learned so much about culture and difference from these years and know now that diversity enriches us. It is misunderstanding, fear and hate that diminish us.

Whether we’re Catholic or Protestant, we’re Irish. Republican or Unionist, we’re Irish. North or South, Polish or English, we’re all Irish if we live and cherish the idea of Ireland and what it means to us as a home. New diversities make us critically think and question our prejudices and reach new understandings and better journeys for our peoples together. We have to embrace those better journeys and not stand still, frozen in time in a culture we think doesn’t evolve when it’s a fact they all do.

Today we are discussing diversity and many of you are migrants in this new home of ours and some have faced terrible comments and attitudes but take hope. Migration is a force of history and can never stop. Yellow haired Irish came from Vikings, brown haired Irish are Normans. All Irish since the Ice Age are migrants. And to those still-prejudiced persons who shout ‘go back’ or ‘go home’, this is your home and had the Irish ‘gone back’ or ‘gone home’ then America would be less over 35 million people and 15% of Canada would not now exist. Just as our diaspora has enriched the culture of the world, so yours will enrich the culture of our world here and now.

It speaks in the language of strength and compassion, but always in the same voice of kindness to all human beings, for we are all one people. Everyone in this room today, we are one people!

No matter the blood, the skin, the tribe, the nation, we are one people and one world.

Each voice enriches and enables us and each one lost diminishes us. Embracing diversity means enriching ourselves.