“I don’t want to be merely “tolerated.” I expect my allies and friends to challenge every instance of Transphobia in all its guises to help me and every transgender and intersex individual achieve the acceptance and respect we deserve.”

“Every instance of intolerance, disrespect and hatred that goes unchallenged, no matter about or aimed at any marginalized individual diminishes us as a society.” 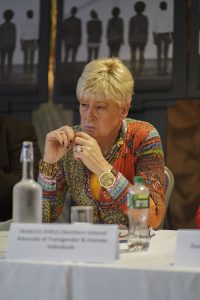 Good afternoon, everyone,
I have to say I’m feeling quite daunted in attempting to follow all the excellent presentations, made by the inspirational people who have already spoken and presented us with so many challenges and insights into the disaster that is BREXIT, that will have such profound effect on all of us on this small island.
I will preface my remarks by stating clearly from the start that transgender and intersex individuals are and always have been a part of every community and not apart from society.

We are not seeking additional rights over and above those that almost everyone else in society expects and largely enjoys.

We want to live in a society of equals where each is treated with dignity and respect and recognized for the unique contribution they make.
We are your sons, your daughters, your sisters, your brothers, your uncles, your aunts, your parents, your grandparents, your work colleagues, your neighbours and hopefully, even your friends!!

The UK and Ireland pride themselves as being tolerant societies. I have to ask you ponder, Is that a positive notion?

In the words of prominent Islamic scholar Mohammed Mahallati
“Difference is a blessing, not a challenge. We define ourselves by knowing other people. We know our world by learning about difference.
What is the word we often use?…… Tolerance.
Is that a positive notion? Not really!!……’for the time being, I will tolerate you’
I’m against that concept. It means difference is a THREAT!!
Difference is a blessing and you don’t tolerate a blessing. You EMBRACE it.”

I don’t want to be merely “tolerated.” I expect my allies and friends to challenge every instance of Transphobia in all its guises to help me and every transgender and intersex individual achieve the acceptance and respect we deserve. Every instance of intolerance, disrespect and hatred that goes unchallenged, no matter about or aimed at any marginalized individual diminishes us as a society.

My favourite piece of music is a song by a Derry band, Paddy Nash and the Happy Enchiladas. In 2012 they released an album “Times of Transition” and the track “Works of Art” contains the words “In times of transition we are all living in a big Museum and we are all individual works of Art.”
This epitomises that concept of acceptance and respect for diversity that is so fundamentally at risk because of BREXIT.

I want to Thank Vanda and the Filipino Community in Cavan for inviting me to contribute to your celebration and inclusion of Diversity.

We were established to provide Peer Support Services to transgender and Intersex individuals and their families in Northern Ireland and the Border Counties of the ROI (More information about us and our Services can be found on our website www. Thefocustrust.com)
Policy Advisor to the Gender Identity Panel

A member of the Gender Advisory Panel
An advisory group established by the Northern Ireland Executive to assist it in developing and monitoring its Gender Equality Strategy which sadly is gathering dust on some Senior Civil Servant’s in-tray because of the absence of a functioning Executive in the North – I believe Bronagh Hinds must be as frustrated as I am over that!

I’m an Eco-warrior. We successfully prevented the establishment of waste incinerator in Derry on 3 occasions- I was aboard “the Rainbow Warrior” when we successfully blocked Lisahally Port to prevent such an eventuality.

Anastasia is really correct when she points out the environmental threats to the entire island, due to the inconsistency of across the island North and South. I believe the current attempt to extract Gold from the Sperrins is a case in point. It’s my belief and that of many other environmentalists that that is only the start of it, watch this space! Once they have raped and destroyed the Sperrins for its gold, the next thing is UK and Europe are looking for storage for all the spent nuclear fuels and other waste used in nuclear medicine etc. Where better than in some “Backwater” in the North, nobody in the UK cares about!

I’m a “would -be” creative writer, performer and poet
In short, I’m a HUMAN BEING not a HUMAN DOING (Maybe we’ll come back to that though if we’ve time later?)
I’m originally from Derry/Londonderry/Stroke City or as we now prefer to call our City since 2013 “LegenDerry”!!
We’re a Border City and I have to tell you BREXIT is the most dangerous divisive issue we in the Border areas face.

There is a great emphasis on the BORDER in this Jurisdiction, in the UK and in Europe in terms of the Economy, movement of goods services and facilities
BUT the VERY REAL and MOST DANGEROUS PART is its effects on our RIGHTS and EQUALITY LEGISLATION
IT AFFECTS POTENTIALLY EVERY MARGINALISED GROUP ON THIS ISLAND:
Ethnic Minorities
EU Citizens
Non-EU Citizens, Migrants, Asylum Seekers
Disabled People
Minority Sexual Oriented People
Women and Children
And of course, my particular constituency
Transgender and Intersex individuals and their Families

This is where my true expertise lies by virtue of my personal Lived Experience of the issues we collectively and individually survive on a daily basis.

I don’t presume to speak on behalf of the Lesbian , Gay and Bi-sexual Community, their issues are largely to with who they are attracted to, fall in love with, want to form romantic attachments and relationships with, whereas my issues stem from my internal sense of identity, being at odds with how society sees me, expects me to behave, dress and express the gender I was assigned at birth which is permanently at odds with my sense of self.
Being Transgender affects every aspect of our lives
Education in every setting Primary, Secondary and Further
Housing
Employment and Training
From recruitment, training, promotion etc. God forbid, we should want to transition in an existing job!
(Transition is the term used to describe the social and often medical processes involved in moving from your “assigned “gender to living in what the medical profession describe as your “acquired” gender but what for us has always been our TRUE Gender. I have known from my earliest memory that I was a girl, AM A WOMAN
Healthcare (including specialist services)

Neither Jurisdiction, ROI nor UK willingly accorded me nor any other Transgender individual any specific rights in any of these areas.

It was only by dint of European Human Rights legislation and resort to the European Courts by brave individuals challenging both Legislatures that people like me have any specific protections and remedy in law at all.

In the UK it was only through brave people like April Ashley, the Goodwin case, and Professor Stephen Whittle that the Uk Government was forced screaming and kicking to introduce its Gender Recognition Act in 2004 that we had any specific rights. This Act was never completely fit for purpose but was a huge step forward.
In Ireland the situation was even more dire and it was not until 2015 that my good friend Dr Lydia Foy, having taken her case to Strasbourg twice and having won her case for recognition on both occasions, that Gender Recognition was passed in 2015. I have to acknowledge that even though we had to wait so long, Ireland now has some of the most comprehensive and effective legislation in the world but much still remains to be done.
Believe it or not Northern Ireland was once ahead of the game in these islands with the introduction of its Sex Discrimination (Gender Reassignment) Order1999 in the wake of the Good Friday Agreement! Sadly, that has long since ceased to be the case.

Already the UK Government has already begun to roll back on the hard fought for rights won by my constituency by some of the clandestine terms contained in its Equality Act 2010. It is attempting to roll back on my rights as an Irish Citizen, as A British Citizen in Northern Ireland those rights accorded me under the terms of the Good Friday Agreement.

As regards Healthcare provision generally, there is a genuine real and imminent threat to the current cross border joint provision and access to services. There is serious threat to provision of efficient and effective ambulance service provision in the Border Regions
What is going to happen to Children’s cardiac surgery provision,
What is the future of Cancer Service |Provision? In my native region Altnagelvin Hospital provides Cancer services to the Northwest Healthcare Region through a joint agreement with the HSE and Western Health and Social Care Trust.
There are numerous other specialist services I could mention.
But what of my own constituency, Transgender and Intersex Individuals?
There are no Gender Reassignment surgeries performed anywhere on this island!

We all have to go across to mainland UK to access surgical services Both jurisdictions use the same surgeons.Aftercare is an absolute joke, any complications you have to attend A+E, to be placed in the care of doctors who have never seen these surgeries before, are frightened to touch you lest they do something wrong or ruin the complicated surgery already performed.
As a result, there is no dedicated specialist aftercare support anywhere on the island.

It is highly unlikely that we would ever generate enough referrals to merit a dedicated specialist surgical service either in the North or in the ROI or even on an all-island basis, however we believe we could generate enough cases to merit regular dedicated surgical lists in a designated hospital somewhere on the island, this would provide a much better experience, enable the build up of expertise in aftercare on the island, reduce costs overall, in terms of provision, improve patients’ experience by making it easier for friends and family to visit you in hospital when you are at your most vulnerable and isolated.
We have quite a well-developed treatment pathway in Northern Ireland, both for adults and Gender-variant children and Transgender adolescents, no such provision has been developed in ROI, access to treatment, even if you are to be offered any specialist care is an absolute lottery dependent on the goodwill of your primary care doctor.

In terms of Peer Support provision, there isn’t anything North of Galway in the West and North of Dublin on the East Coast. Focus: The Identity Trust struggles to fill that gap, we provide individual support and satellite group provision to individuals in Counties Sligo, Monaghan and Donegal, together with Dundalk and Drogheda, on a volunteer basis.

People, BREXIT is the most serious Threat for us ALL on this island, it threatens all of us in terms of our Human Rights.

Bronagh mentioned the Civic Forum, we in Northern Ireland as Civic Society, as Community Activists as campaigners, we are all exercising and generating as much collective influence as we can at local, National and International to mitigate against the effects of BREXIT.

Folks, IT IS UP TO ALL OF US IN THIS ROOM TODAY TO LEAVE HERE AND PUT COLLECTIVE PRESSURE ON ALL OUR POLITICIANS, North AND SOUTH AND IN EUROPE TO STOP THIS RUNAWAY TRAIN OF BREXIT.
STOP IT NOW!