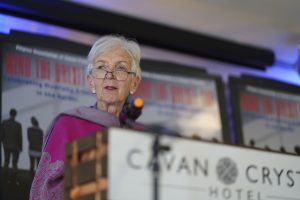 “WE ARE FACING A TOXIC GLOBAL DISCOURSE…”

HERE IS THE WELCOME ADDRESS OF ANASTASIA CRICKLEY – Community Worker, Academic and Lifelong Human Rights and Anti-Racism Campaigner & Former Elected Member and Chairperson of the UN Treaty Body on Racism

===
I would like to acknowledge the contribution of all of you in this room who are part of Ireland now, who are part of the diversity that is part of Ireland now. I would like to acknowledge your contribution even though sometimes you are not even allowed to make it due to the conditions you find yourselves in but I would like to acknowledge that. And I think the way you’ve brought the communities together here this afternoon, celebrating your Independence Day, looking to the major issue of Minding the Brexit Gap and speaking very clearly about diversity and inclusion in the border region, the way you all come together to do that is indeed commendable. And I wish you well on it and I am very glad that also here and associated with it are a number of local and national politicians because in the end there is a need for their input too and for all sides to hear one another even if some of that hearing can be a little bit challenging so I would like to commend all of you for this effort and wish you well with it.

I’d like to speak as someone who has been involved a little bit with the Philippines but in particular as someone who has spent a number of years engaged in community development and human rights work both here and externally. I remember actually I was in the Philippines in January 1986 just before Marcos fell it was a really an interesting time of hope and enthusiasm. And I am conscious that since then you’ve had your ups and downs and I am very conscious – as a person who has been actively involved in human rights – of the way that there are direct human rights challenges at the moment. But I know that among you, you have the strength and commitment to be able to address and to deal with those challenges. I am sometimes interested in the way in which, I hope that like my late and much loved husband and to others – that they have actually made a contribution to your country. But I am very conscious that that has multiplied by the contribution that you have made in return here.

Now to move on very rapidly then, we are all are facing a very challenging time at the moment. Globally, I think, in terms of human rights. We are facing a time of toxic global discourse. I was very glad to see that our own European elections in the last week did not reflect that toxic global discourse in a way that a number of people were concerned that it might and I’d like to commend all of you who might have been involved in the elections in one way or another for the work that you did, sometimes by silence and sometimes by statement to ensure that happened. But I do know there were exhibitions on the doorsteps for minority candidates who stood in various areas and I would just encourage you to make sure that those issues be made known so they can be dealt with in the future.

We are facing a difficult global context and we are facing a difficult Irish context but I feel that there are also opportunities. And if the last week has shown us anything, it has shown the capacity of people to make decisions that are in favour of others and it has shown the capacity of people not to go to the populous route automatically but to consider what route they are going to take. And I know that some of those choices are difficult to take, like for some of the people sitting here. But I would like to say that we have a chance now and that let’s do what we can to make the most of it. It has to be acknowledged also the relevance of the border for dealing with the major issues of the day, for example dealing with the sustainable development, environmental issues and most of all climate justice. If we look at the way in which for example in the Republic now there is anti-fracking legislation brought about very much as a consequence of community-led campaign endorsed by the Dail, and by our TDs of the Dail. But in the north there is no such legislation so on one side of the border you could have a fracking-free zone but on the other side of the border, in a way that will directly affect the south of the border also, you can have fracking. So there are ways that this border from the point of view of economic, social and cultural issues is pretty impossible space and quite obviously the advent of Brexit make it even more so.

I am very conscious of the extent to which when we look to Brexit we have to acknowledge that there are challenges with regard to the rights of migrant workers and there are challenges with regard to labour rights particularly for people who aren’t citizens that would need to be addressed and that need to be claimed to be addressed. There is a need for data and information. We need local information. We need to know who is here and who are citizens and who are also here on various visas and who could be in very difficult labour situations as a consequence of decisions they find themselves in. Who is struggling here on a wing and a prayer because they know that their children haven’t got the type of identification that they need to have in order to be comfortable to remain, and what can be done to ensure that those things are dealt with. Those are very small things but I believe that they are things that are quite important to begin to address very, very rapidly at this point in time. I am very conscious that Brexit – as people talk about the hard and soft Brexit – that Brexit has a very real meaning for all of you here. For travelling, 20 miles down the road maybe for some people, that it will become increasingly difficult to do that. The extent to which you use cross-border facilities, the extent to which some people work on the other side of the border and the way in which those things very rapidly affect in particular people who have no citizenship. I think those are all really important things to accommodate. And if there is a way I believe that you and all of us can actually get this Brexit discussion beyond a political argument in Brussels and in Westminster and in Dail Eireann, it is quite fitting to tell your stories to begin with by being able to be very clear of how Brexit will affect you and by beginning to name the things that you want to happen to create conditions where it shouldn’t affect you to the ultimate extremes. Of course for a number of us, even although most of us, including myself are critical of the European Union, for a number of us , the best possible solution would be no Brexit whatsoever but I think we are putting our heads in the sand by now if we think that that is the most likely outcome. And if the most likely outcome is Brexit, then let’s see what we can do to do something about it.

But let’s do it in a way that celebrates also the great people that you all are and so that we continue to enjoy the afternoon and so that we can also work together for each of us in a way that celebrates what has been possible to do so far. And what you have done so far in this region to relate in a cross-border way needs to be acknowledged and named very, very directly so that its continuation can be to some extent be a part of the major discussion that should be happening over the next while. Thank you.