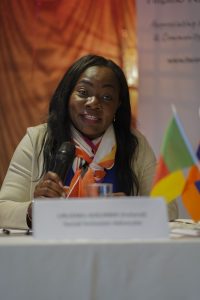 “Migrants whose rights are protected can live in dignity and security. In turn, they contribute to society both economically and socially than those who are exploited, marginalised and excluded.”

“Immigrants struggle to integrate and can get trapped in inactivity. Welfare benefits can seem as incentives to stay in the home. They can appear as financially advantageous as engaging in training or paid employment.”

“Migrant groups can help to bridge the Brexit gap by assisting its members navigate the maze of information to avail of government support for business owners, workers and consumers in preparation for Brexit as it will affect us all in one way or another.”

“All human beings are born free and equal in dignity and rights.”
– Universal Declaration of Human Rights, 1948

There are 258M migrants in the world – that is 3% of the global population.

People migrate in search of better living and working conditions, due to persistent economic, social and demographic inequalities, as a result of human rights violations, environmental change, conflict and violence.
In 2016, more than 65M people fled their homes worldwide….

The population of Ireland is 4.8M!
Population in Cavan 76K approx.; population of Longford 48K approx.
Children make up 50% of those fleeing persecution and violence. Some unable to return home in the short or medium term.

Global mobility and migratory patterns have an impact on countries, migrants, families and communities. As such, international migration has become a priority for the international community. The UN’s 2030 agenda for sustainable development are: to end poverty and hunger; protect the planet from degradation; ensure all human beings enjoy prosperous and fulfilling lives; peace in society. These efforts through partnerships of all countries and all people require the participation of immigrants.

A human rights approach to migration places the migrant at the centre of migration policies. The situation of marginalised and disadvantaged groups of migrants are given full attention. This ensures that migrants are included in necessary national action plans and strategies, such as provision of public housing or to combat racism and xenophobia.

Migrants whose rights are protected can live in dignity and security. In turn, they contribute to society both economically and socially than those who are exploited, marginalised and excluded – case in point: Direct Provision.
We can all see the DP system is not fit for purpose and we need to call for its end and an integration of its residence in society. There is a DP centre in Longford and as a community, we endeavour to engage with the residents and provide support and assist them to participate in community activities. The local Garda are also involved, providing information and Irish lessons to the residents.

Immigrants struggle to integrate and can get trapped in inactivity. Welfare benefits can seem as incentives to stay in the home. They can appear as financially advantageous as engaging in training or paid employment.
This inactivity can have long-term consequences for their children; in terms of reduced enrolment in preschool during the critical early years and when they eventually attend primary school, they are at a disadvantage compared to children that attended pre-school. These learning difficulties sometimes reduce their chances of succeeding in school.

Migrant groups like the Filipino Association of Cavan; Longford Africans Network promote equality and positive action to prevent social exclusion by helping to create an enabling environment and support the cohesive integration of migrants in the community: by assisting with access to training and job opportunities; linking entrepreneurs with grants available; participating in community events.

Another importance of migrant groups is to celebrate excellence among migrants.
These groups can also help to bridge the Brexit gap by assisting its members navigate the maze of information to avail of government support for business owners, workers and consumers in preparation for Brexit as it will affect us all in one way or another.

With Brexit, the UK is outside the Single Market and Customs Union. With a no deal Brexit, UK would no longer be part of the framework of EU law. This is a huge headache for Ireland as the UK is its main trading partner.
Government legislation published this year outlines measures that the Government is taking, both nationally and in conjunction with the EU, in preparation for the possibility of a no deal Brexit. These measures particularly in the areas of Healthcare, Transport, Education and Energy will support North-South cooperation arrangements and bring tangible benefits to the daily lives of people in the border region as well as contributing to economic opportunity and development.
This proposed legislation makes provision for continued access to healthcare, social security protection, student support and protection of consumers. Maintaining the Common Travel Area and the associated rights and privileges is a priority and this is vital in the context of the Good Friday Agreement and the Northern Ireland Peace Process, as well as broader UK-Ireland relations.

Ireland is the land of a hundred thousand welcomes.
Caed Mile Failte

A recent poll of the Irish public on attitudes towards immigration and refugee protection revealed that we describe our country as welcoming, tolerant and open. There is strong support for values such as ‘fairness’ and ‘compassion’. Indeed, recent occurrence in Longford confirms this:
There was a photo of school children of multicultural ethnicity published in an article by The Longford Leader, a local newspaper on 31st May 2018 which celebrated the School’s achievement of a Green Flag. Instead of lauding this achievement a certain individual chose to highlight diversity as a threat.
Through concerted efforts by the School, parents of the children, the Gardai and the Longford Leader, we succeeded in getting the offensive post deleted from the individual’s social media.
I would like to take this opportunity to thank the Irish people all over the world for uniting against such discrimination and condemning strongly the action of the individual and her cohort.

Our diversity is our strength.
I would also like to thank Vanda for the invitation to contribute to this event.
Congratulations to the Filipino people on your 121st Independence.