The event was prominently featured in various local media: 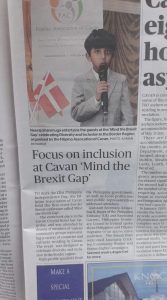 Philippine Labour Attaché Assistant Secretary Amuerfina R. Reyesof the Philippine Embassy in the UK and Raymond Garrett, Philippine Honorary Consul to Ireland first spoke about the Philippines and Filipino migrants to a diverse multi-cultural and multi-sectoral audience. The forum was then welcomed by Philippine Anastasia Crickley who is a Community Worker, Academic and Lifelong Human Rights and Anti-Racism Campaigner and Former Elected Member and Chairperson of the UN Treaty Body on Racism with connections to the Philippines through late husband and former Columban Priest John O’Connell. Ms. Crickley emphasised that the Brexit discussion should now go beyond a political argument and to start looking at challenges it would bring with regard to migrant rights and labour rights. She encouraged everyone to begin naming the things that they want to happen, to let politicians in Ireland create practical solutions where Brexit should not affect society to the ultimate extremes, and for everyone to achieve all this in a way that celebrates diversity and inclusion.

To set the tone of the panel discussions Couples for Christ Mission Head for Ireland Victor Cosingan presented his thoughts on “Brexit and My Hope for the Future” along with Latvian, Polish, Lithuanian and Zimbabwean community members.  Two Panel Discussions started with informative and empowering talks given by the following distinguished panelists followed by a Q & A:

Bronagh Hinds brought to light that when Brexit happens, we should negotiate a result for Northern Ireland that is compatible with the Good Friday Agreement which foresaw greater harmonisation between North and South, and for all to work towards the continuing evolution of relationships between both parts of Ireland as seen in that Agreement. She added the effect of Brexit on citizen rights and health rights in the North and the South, and that Brexit negotiations should not only involve one political party but to hear all voices including marginalised communities.

Advocate for Transgender and Intersexual Individuals Frances Shiels from Northern Ireland does not wantto be merely tolerated by society.  She expects her allies and friends to challenge every instance of Transphobia in all its guises to help every transgender and intersex individual achieve the acceptance and respect they deserve.  For her, Brexit is the most serious threat to Human Rights and it is up to us to put collective pressure on all our politicians, North and South and in Europe “to stop this runaway train of Brexit.”

Ping Cao, a Chinese Migrant and Lecturer/Researcher at Dundalk Institute of Technology thinks discrimination will heighten when Brexit happens. Being shouted at by locals to “Go home to your country!” has scarred for life, a brutal statement which she believes can affect migrant children even more because they have no other place to go.

A former illegal worker in the United States himself, Teachta Dála TD (equivalent of Member of Parliament) and Spokesperson for Border Region DevelopmentBrendan Smith, highlighted that Brexit is not just about the economy or trade, but it is about people and how it could impact on people’s daily lives. He also said that the Oireachtas (Ireland’s legislative body) is consumed with Brexit and there is ongoing and endless dialogue and discourse between politicians and different groups on Brexit concerns.  He would be glad to bring to a hearing the issues that have been raised upon the request of a representative organisation.