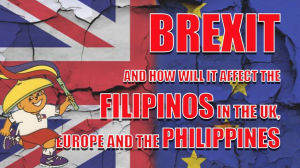 Everyday, at least 30,000 people cross the border between the European Union and the United Kingdom to visit, work, study, or run a business.

It is common for individuals to switch between the two jurisdictions many times by travelling through the Common Travel Area (CTA) on the Border Region, which include Republic of Ireland counties Donegal, Cavan, Monaghan, Leitrim and Sligo, and Northern Ireland counties Derry, Antrim, Armagh, Down, Fermanagh, and Tyrone.

On March 29, the United Kingdom (UK), which is made up of England, Wales, Scotland and Northern Ireland, is scheduled to leave the European Union (EU). Many have become aware of this impending withdrawal called Brexit, which has now become a common household term coined from “British” and “Exit”.

Since the 2016 Referendum where the UK first decided to leave the EU, the impact of various complex cross-border factors have become a constant concern: employment, business and agriculture, access to healthcare, social welfare and public service benefits, education, basic freedom of movement in the EU, the right to equal treatment, plus other related entitlements and opportunities.

Filipino migrant workers, students and entrepreneurs who cross the Northern Ireland and Republic of Ireland border, are among those most affected.