My Final Learning Journal for the QQI Community Development Course 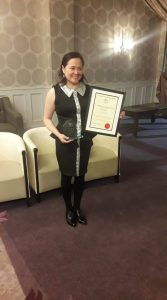 On April 26, I received the Cathaoirleach’s (Cavan County Council Chair) Annual Award for Social Inclusion 2019 for my exceptional achievement, effort and service in a voluntary or unpaid capacity in County Cavan and the rest of Ireland. I was nominated by Philippine Honorary Consul to Ireland Raymond Garrett and awarded by Cavan County Council Chair Madeleine Argue. As founder of several organisations in Ireland – the Filipino Association of Cavan, the Cavan Cross Cultural Community, Outreach Ireland, and the European Network of Filipino Diaspora-Ireland, I contributed to the Cavan Community through my work volunteering with the cross-community groups assisting Filipino nationals with cultural integration, basic migrant rights and multicultural participation in mainstream Cavan and the rest of Ireland. Married to a local Cavan native, Shane Brady, I have integrated my life and continue  to strive to promote inclusion for others in everything I do, working tirelessly to break barriers and stop exclusion and promote inclusion and integration.

My inspiration is Vising Kennedy, who I believe shared in her book “From the Philippines to Ireland: A Voyage of Discovery.” In this honest and eye-opening account of her life as a veteran immigrant, retired Filipino journalist Vising Kennedy explores cultural differences and similarities between her two homes, as she goes on a journey of self-discovery. In sharing episodes of her life, she offers invaluable advice on how to tame culture shock, while highlighting what migrant workers are currently experiencing in Ireland. This is a book to be enjoyed by Filipino migrants all over the world, as it teaches them what to expect from being in a foreign land and helps them discover new things about themselves as they traverse unfamiliar ground.

Quoting excerpts from her book that was published in June 2017, the following insights about integration have moved me in the most enlightening way:

“Where is the Philippines?”

“Why do you carry Spanish names?”

“Where did all those nurses come from?”

These were a few of several questions people asked me during my early days in Ireland.  While I was happy that people were curious about me, I couldn’t but stammer and struggle with my answers. I was embarrassed to discover that I didn’t have much to say about myself, my country and my people.  I thought I have to forget my Filipino hood in order to integrate in Ireland. How wrong I was!

As I went through culture shock and struggled to know the Irish, I was confronted with a never-ending process of self-discovery. I realized that if I should integrate and be confident in another country, I must not only know the other; I must first and foremost know myself!

Describing one’s own culture is difficult. It is a bit like asking a fish in water what it is like to swim in the water. Washed up on the beach, the fish quickly recognizes the difference but may not be able to describe it. Its immediate objective is to get back into the water.

Indeed, we are so unlike our fellow Asians in the mainland. The Chinese, Japanese, Indians, Cambodian, and Vietnamese clearly establish their uniqueness with their own language, custom and religion. Such Asians make no bones about their alien nature; but Filipinos mislead with a western veneer, create impressions and lull not only strangers but even themselves into false premises and postures.

Filipino culture faces a never-ending change amidst speed of mobility and constant exposure to different cultures as experienced by many overseas Filipino workers.“Ang di marunong lumingon sa pinanggalingan ay di makararating sa paroroonan.” This is a saying from no less than Jose Rizal, our national hero, who himself was a constant immigrant in his time. It means literally, “Those who are unable to look back at where they’ve come from will be unable to arrive at their destination.”  In the context of cultural integration, it means, unless I know myself and my own culture (where I come from) I will find it difficult to see the signposts to where I’m going.

We only begin to perceive our culture when we are out of it confronted by another. And we only get to understand our culture more when we appreciate and make the effect to know our roots of where we came from.

Ireland is no longer a monoculture society.  One in eight people working here was born elsewhere. Some 70,000 of these have taken Irish citizenship so much so that as an Irish Times Editorial, (12 April 2014) states, … “an understanding of the backgrounds and cultures of these diverse groups represents a vital element of balanced policing and in relations involving health, education and welfare agencies. Prejudices based on sweeping assumptions, ethnic origins, religious beliefs or skin color should have no place in Irish society,” Prof Jeffrey Alexander, an American sociologist, on the day he was awarded an honorary doctorate (Irish Times, 2013) by University College Dublin (UCD) spoke of the need for immigrants to be visible. For migrant groups to win a place in society he maintains that the main culture has to come to “admire” the other culture and possibly “change”. He said change has to be a kind of “mutual seduction” and immigrants have to “write novels that are best-sellers” and “open restaurants”. “There has to be a kind of…  “dramatic moments that tell stories” to allow people in the center of society to identify with them.”

Who would make this ‘mutual seduction’ possible? Who can make us visible in Ireland?  The challenge is on us.  With hope and trembling, I wish that given time, we will discover that cultural differences are not threats to be overcome but a challenge to be enjoyed.

In my nine years of living in the UK and Ireland, I have learned that whether emigrating was a choice or a necessity, integrating in a new country can be overwhelming, and even demotivating. While we learn new ideas, know-how, skills and attitudes in our second home, how we use these new learnings is what matters.  We can use these positively and shift from utter confusion to an incredible clarity and determination of who we are. Integrating is a way of discovering ourselves from learning about other cultures. The ideas, know-how, practices, and skills that we learn in our new home can help us become better persons, and in turn, contribute to our home country and host country’s future in an increasingly globalized, competitive and fluid world. Attitudes can shift from utter confusion to discovering ourselves from learning and accepting others, and finally having an incredible clarity and determination to be heard in a foreign land and get that well-deserved recognition.  With that, I am thankful that all my hard work has paid off after receiving that Cathaoirleach’s Annual Award, and I am motivated even more to work harder by promoting Diversity and Inclusion.  Let us continue to work on this mission.