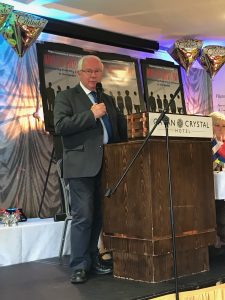 Could I just complement Vanda and her colleagues in the Filipino Association here in Cavan in organising this very worthwhile event. I have been at the Philippine annual Independence Day celebrations in the past and again it has been a marvellous occasion. And congratulations to the Filipino community on the celebration of the 121st Independence. It is always important for countries to celebrate their Independence Day. With the members of the Lithuanian community I had the great privilege in 2018 of representing our country in the Lithuanian Parliament on the 100th anniversary of the founding of their state. It was a real privilege to participate that day in that particular history, knowing the history of Lithuania and its neighbouring countries as well and what they suffered losing their independence by being invaded by other different countries as well. So it is important that all of us celebrate the independence of our countries and the people who gave us the freedoms that we enjoy today. A day like this is very important for us as public representatives. It gives us the opportunity to listen to the real stories as Maria said. I have often said, and I have been very active on the whole issue of Brexit through my work through the Parliament through chairing Parliamentary committees as well.

Brexit is not just about the economy. It’s not just about trade. But listening to unfortunately we have a national media that does not do our country proud. That’s what the print media and the broadcast media leave a lot to be desired in our country. But some of us have tried to get across that Brexit is about people. It’s about how Brexit would impact on people’s daily lives. And that is never articulated in the media unfortunately. And those of us who try to get that message across, we will never get any coverage from that aspect of Brexit and its severe implications. Listening to the stories here today from the panelists who are with us at the moment and earlier panelists demonstrates very clearly the serious difficulties that will arise with Brexit – soft border or hard border – there is a downside no matter what we face unfortunately. Earlier I mentioned to Bronagh and Anastasia as well, the importance of ensuring that the concerns and the worries of communities, migrant workers, minority communities, people who have genuine concerns with Brexit that they are articulated through a national representative organisation because oftentimes what happens is individual groups and groups in geographical areas they would often do exceptionally good work. But I think when it is brought together in a Northern Ireland context or in a Republic of Ireland context it gives greater weight to the argument if it is a larger umbrella body representing the concerns of people. So whatever we can do at Oireachtas level and it is late on the day now so it is, unfortunately, the whole context of Brexit. I would be very glad to bring to whatever forum I can the issues that you have raised today. And they are very, very important, and we can’t leave that to the last seconds when Brexit countdown starts.

So again, it was heartening to learn the excellent contributions today and I was very glad to hear the lady who said that in Ireland she was met with nothing only a welcome a Cap Me a Volcherbut of course there is some intolerance that we want to root out in society. And as an Irish people, we have great empathy with people who have had to leave their homelands because our country, going back to an awful famine that was literally imposed upon us by our neighbouring island when it could have been avoided at that time. We lost so much of our population so much suffering and the emigration that it denuded our country for so many decades and decades and decades. Our people, when they went abroad, they didn’t get a great welcome either unfortunately. For many cases, not going back centuries when Irish need not apply, all of that, so as a people we should have empathy with other people who have had to leave their homelands. I have worked as an illegal migrant in the United States myself, having left school, and I have to say going to the building site where we worked in those times for the amount of time we were there, every morning, we dreaded meeting the police at the railway station at 6am in the morning because we didn’t know when we were going to be asked “What’s your legal status here?” We feared that day, so I lived through that, and there’s not too many Irish people that didn’t live through it in some shape or form for a few summer months or whatever.

So I just want Vanda and her colleagues and all the other representative organisations and representatives of other nationalities as well who are here to say that you do a great service in bringing these issues of concern. And I have to say that as a public representative in this county for quite a long time, I believe that the people that I represent have nothing but the height of respect and welcome for people from all nationalities in this country and we value the very important role that you contribute to our local society, to our national society, and that’s the way it should be, as you really so well put it, that diversity is our great strength in our country today. (Irish message). Many many thanks.