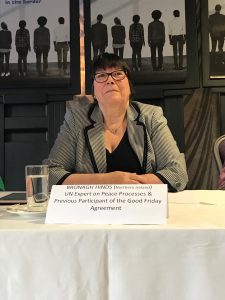 “If we do negotiate Brexit that we negotiate a result for Northern Ireland that is compatible with the Good Friday Agreement.”

“The Good Friday Agreement foresaw greater harmonisation between North and South and we must all work towards the continuing evolution of relationships between both parts of Ireland as seen in that Agreement.”

“We need to ensure that North-South work between us and the political level is prioritised to make the border completely irrelevant no matter what. And we must assert ourselves in the border regions and lobby decision-makers wherever they are.”

“Mind the Brexit Gap: Celebrating Diversity & Inclusion in the Border” on the 121st Philippine Independence Day – 1st of June 2019
====

Good afternoon everyone. I know you are a long time sitting but I would like to thank Vanda and the Filipino Association of Cavan and the Cavan Cross Cultural Community for the invitation to speak here. It follows hard on the heels of work we have all been doing together across Northern Ireland and in the Southern Border counties from Donegal, through Cavan, Monaghan and Louth and I am delighted to see several people here who were involved in the programmes. First of all I’m gonna speak about the other side of the border and introduce some of that. Coz Northern Ireland has been a very clear example of what an inward looking society with little diversity can descend to and we cannot go back to that. The EU widened our horizons and helped us to break out of this and to make peace. It is our duty to protect and champion diversity in the face of Brexit which is the biggest attack on diversity that we have witnessed for a very long time. We must oppose sectarianism and racism which have been used viciously in Northern Ireland and in other sites of conflict across the world to further political ambitions at the expense of whole communities, whole societies and building a shared future. So I think it is our duty to give leadership to something different. I know that people who have come to live in Ireland now represent about 17% of the Irish population and have contributed enormously to the workforce in the South of Ireland in many, many different disciplines. And Malwina showed us how one can celebrate both one’s own roots from our previous ancestry and the country in which we live. It is not something to fear as it is often put out by ardent Brexiteers but actually something to welcome and to cherish.

Northern Ireland only became attractive to international commerce since the Peace Agreement. It went rapidly up from the year 2000 thank heavens because this helped us to detoxify our conflict and diversify our communities. And we thank all of you who have come to live in Ireland -North and South- for that. Poland of course, we have had speakers from Poland and Lithuania – are top of the list in Northern Ireland by far and Philippines is way up there as well in the Top 10 and it has been really, really important to us. Interestingly, in terms of talking in the border regions, research from the Northern Ireland Assembly shows that the west and the southwest of Northern Ireland showed the largest inflow of new residents. Therefore, this reinforces the importance of today’s event which is celebrating diversity in the border regions. And I think you hold the hope both for diversity and actually doing away with borders as well in the face of Brexit. Inward communities have deeply enriched us and the border regions can point to the direction for inclusion and community cohesion, as was mentioned earlier, and breaking boundaries and breaking borders.

Ireland has a National Action Plan on Women, Peace and Security and you’ll forgive me for my background speaking particularly about the role of women. Than National Action Plan addresses conflict at home as well as abroad. Ireland was the first country to actually do that. Taking gentle steps, not very strong in the first National Action Plan moving forward as we move towards the third National Action Plan. And we need to see increased attention I would suggest to refugees and asylum seekers who have come to Ireland, to Northern Ireland, and to the communities across the southern border regions which are often overlooked in terms of the conflict. I’ve often heard it said in Dublin “all the conflict has passed” and yet we know from our work across the border regions that the history and the trauma is still there for people here and the southern border regions and we need to overcome that. So it requires champions from among all of us to step up and to assert this. And I see the women who have been through the Next Chapter programme stepping up. That was the programme that I referred to that worked with several hundred women across Northern Ireland and in the southern border counties looking at Women as Champions of Peacebuilding and Women in Decision Making, Politics and Public Life. And many are beginning to step up to leadership many are in leadership. Some ran for election in the last elections in the North and in the South. And interestingly enough we looked at case studies on conflict at Ireland and the Philippines as well as Colombia and Liberia. And I would like to congratulate you on the Independence Day.

On the Good Friday Agreement and Brexit. Of course we know it is an international treaty which provides for the totality of the relationships on this island and between Britain and Ireland. Ireland is a co-guarantor of the Agreement. And it is crucial that the British and Irish government maintain their solemn duty to oversee the full implementation of the Agreement and negotiate if we are to Brexit and it is still a question mark. And if we do negotiate Brexit that we negotiate a result for Northern Ireland that is compatible with the Good Friday Agreement. Let me be clear about it. Northern Ireland does not want to leave the EU. You can be forgiven for missing that given that the conservative government works with the Democratic Unionist Party. But actually we voted to remain in the referendum. And this remain vote was reinforced and increased in the recent EU election as well as getting a historic three women elected, two MEPs and all their voters support remain. We thank the EU for bank rolling the peace process and we expect the EU to maintain its important stance in safeguarding Northern Ireland’s position in the EU. The Good Friday Agreement foresaw greater harmonisation between North and South and we must all work towards the continuing evolution of relationships between both parts of Ireland as seen in that Agreement. And in that work and thinking back to the role of women in the National Action Plan for Women, Peace and Security but for all of us, I think in the context of Brexit, the border regions become key players and can assert their key player status. In the Good Friday Agreement, we had a section on rights, safeguards and equality of opportunity. The parties to the Agreement affirm their commitment to the mutual respect, the civil rights, and the religious liberties of everyone in the community. The right to equal opportunity in all social and economic activity regardless of class, creed, disability, gender, or ethnicity, the right to freedom from sectarian harassment, we can have racial harassment as well and the right of women the full and equal political participation.

Let’s not forget that a lot of attention has focused on the border and the economic impact of Brexit. That is not where the conflict broke out previously. Our history of conflict on this island has been around the equality and the rights agenda and actually how the economic agenda has played into inequalities and the social dimension for all. So one of the fears that there is, and we share this with Northern Ireland and with inward communities, that we have actually a strong foundation of rights and a strong protection of rights and that is why the European Union is an essential context for the Good Friday Agreement. And we lose that at our peril. Actually, the civil society were key players, Anastasia knows this. She and I and others were involved in developing the social dimension actors across the EU with European Anti-Poverty Network, the European Women’s Lobby – all sorts of organisations, networks of refugees and asylum seekers – all sorts of networks across Europe. And we worked with Jacques Delors to develop that social dimension to move from an economic European community that was only economically focused to a European community of active citizens for all its citizens and the recognition of equal citizenship. So for those of us who come from that background and in the context of refugees and asylum seekers and inward migrants coming to Ireland – North and South – and in the context of the peace process – doing everything that we can either to avoid Brexit or to overcome Brexit is absolutely essential for the peace.

So we need to recognise the threat to the Equality and the Rights Agenda for the peace process. We need to ensure that the voices of new communities and of women are included in the Brexit negotiations and we need to actively support the establishment of Northern Ireland’s institutions. And one of the reasons why I am picking this out because one of the contributions that women made to those institutions was something called the civic forum and we also discussed a North-South civic forum and I think we should all be arguing for the re-establishment of that again so that we can have the active civil societies and movements that we’ve seen now emerging in the border regions again can actually play a key role in those kinds of institutions. I work very much in other conflicts as well and I can tell you in my work with Syrian women, even though we are living within UN Women Peace and Security Frameworks and Rights, they look to the European Union and other European Union States as the guarantor of equality and rights in other regions of the world. Now we know we can improve that and it’s not perfect but actually other people are looking to that just as we looked to that as a comprehensive protection for rights on this island – North and South. If Brexit occurs it is essential to put the Good Friday Agreement annexed to it and to ensure that that’s going to be part of it. But we can all take action to make sure that we can overcome any borders that we are going to put up in any places. We can have visible action on the ground by women and communities on a cross-border basis. People from outside asked me why haven’t people formed a ribbon around the border saying “We are not going to have this!” We can strengthen collaboration and alliances between Women’s and Human Rights activists, intercultural groups, migrants rights groups, grassroot groups, labour and trade union movement, academics and politicians working to overcome this. We need to ensure that North-South work between us and the political level is prioritised to make the border completely irrelevant no matter what. And we must assert ourselves in the border regions and lobby decision-makers wherever they are. Thank you very much.