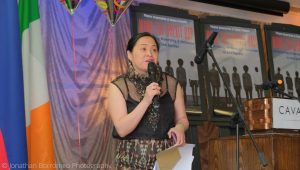 Welcome to “Mind the Brexit Gap:  Celebrating Diversity & Inclusion in the Border.”  There are four of us in the Filipino Association of Cavan who is running this event today, using the Festivals Grant of Cavan County Council.  Myself, Myra Lynch, Jade and Jan Huelar-Fay and myself believe in promoting our home country, the Philippines and most importantly, we believe in integrating and appreciating other cultures and marginalised communities.

I am Vanda Brady, born and bred in the Philippines. My background is in marketing and media education. I lived in England for ten years where I worked as a Business Development Manager of an international fitness franchise and then as a Training Coordinator of a further education college in Southeast London. I met and married an Irish man from Mullahoran here in Cavan, named Shane Brady, and we are now raising two Filipino-Irish children Guia and Charlie in the Brady farm in Cavan in a Philippine-themed home we built.

Knowing that I will be moving from the busy and dynamic environment of London to the very isolated and rural parish of Mullahoran, I decided to give back to my community by using my knowledge and skills through volunteer work. I started by facilitating consular services of the Philippine embassy to over 10,000 Filipino nationals in Ireland and helped publish a book about integrating as a Filipino migrant in Ireland.  Now I have expanded my work to other migrant and marginalised communities in the border region, through the Filipino Association of Cavan and The Next Chapter, which is a cross-border peace and reconciliation networking project to facilitate learning and development on a cross-community and cross-border basis.

Promoting respect, tolerance & acceptance in a multicultural community has been the most rewarding and at the same time emotionally draining job I have ever done. It is where I get the best of both worlds – a hands on experience on helping people’s lives while applying my expertise, which is by far the best value taken from my hard-earned education and work experience.

Now that I have been assigned the Director for Marketing and Communications post of the Philippine Consulate in Dublin, and have helped run successful projects as a Founding Member of Cavan Cross Cultural Community (4C), Filipino Association of Cavan, and soon to be launched Cavan Speaks of The Next Chapter Cavan – I can truly say that in a span of five years, I have served the multicultural and marginalised communities well.

Even before moving to England, I have been dealing with different nationalities, and formed strong friendships and working relationships with various people including disabled, gay and transgender individuals. But it is really only when I left my birth country, forced myself out of the comfort zone of the “corporate world” and started doing volunteer work that I got to know myself and my culture better, and boy how I learned how crazy the world we live in is. As George Clooney aptly said recently in a movie premier, “we are facing a pretty absurd time in our lives – all of us, every country around the world right now.” We live in a divisive and discriminating world, and history and human nature has a lot to do with it.

For instance, Brexit is another big change that may benefit some and disappoint others. Today, it is hoped that attendees will get some sense of understanding or some semblance of order of what Brexit is and its possible effects on our communities. Or since Brexit is still very unclear and uncertain even to the Brits, I hope we will, at the very least, know the different communities around us, know the support networks available for us during this time of uncertainty, become empowered during this unsettling time, and be stronger together with the much needed supportive energy in order to allay fears and anxiety, and prevent communities to be polarised further. Today is also to remind us about our rights and privileges, and for our host countries to recognise and appreciate migrants and marginalised groups.  Since immigration is not yet considered political issue in Ireland compared to other countries, for instance in terms of Brexit, movement of goods is discussed more than the movement of people, it is hoped that immigration should be acknowledged as an issue, that people have different views about it, and that our host countries should not be complacent about immigration before it becomes a big problem.  And most importantly, that migrants and marginalised communities should be involved in all the decision-making processes in our host countries.

In the RTE Prime Time a few weeks ago, it was reported that the issue of immigration is not a big issue in Ireland. 12% of the Irish Population is made of foreign nationals.  The issue of immigration is convulsing the European Elections in many countries, but in Northwest Europe there is little sign yet of the issue becoming as fraught as it is with some of our European neighbours, but there are warnings that this could change.  Complacency is the biggest risk for Irish society or any society for that matter, in relation to new communities. Some analysts believe that differing opinions on immigration should be recognised.  There are real problems and it would be wrong to ignore that people have different attitudes towards immigration, that people have genuine grievances and some communities feel that their social values are not being acknowledged, they feel like things are changing too fast.  The government should respond by firstly acknowledging it and that people are affected by immigration in different ways.  In Ireland, the economy is booming and immigration rising with foreign nationals now making 12% of the country’s population.  The CSO predicts that there will be between 300,000 and 1 million migrants in the next 32 years depending on the economy.  A proportion of this will be Irish people returning from home.

I hope that the forum today leads to more opportunities where the Irish community can meet and talk with migrant and marginalised communities. I have triple citizenship – Filipino-British-Irish. I think I can say I am Brexit-proof at this point. I will always be Filipino by heart. I may have things I do not agree with in other cultures, interest groups, and religious beliefs, but I will always appreciate and respect those differences. In all that we do, I think it is best to work on things we agree on. Let us be open and critical of everything we hear and of the people we meet. And most importantly, let us make the effort to reach out and learn about the different people and communities around us. In every community, there is a good and a bad. It is our choice to be on the good side. We should pick our own battles, which is to learn and fight for the 9 protected characteristics of the Equality Act: age, disability, gender reassignment, race, religion or belief, sex, sexual orientation, marriage and civil partnership and pregnancy and maternity.

Speaking of differences, let me tell you a little bit about Filipinos and the Philippines. Since today we are also having an early celebration of the 121st Philippine Independence Day which is on the 12th of June, it is an opportunity for us to talk a little bit about our country.  The Philippines is in Southeast Asia with over 7000 islands. Our culture and cuisine are influenced by our Spanish and American colonisers. Majority of Filipinos go abroad to provide for their families, and majority work in the healthcare and hospitality sectors. We love to sing, we love to eat, and we are naturally hospitable, gregarious, and hardworking. We also speak English well because it is our medium of instruction in our schools. I have to emphasise that these are the general characteristics Filipinos are known for. But not all of us are nurses, and just like in other cultures, not all of us are nice. Overgeneralising is not allowed. Stereotyping is discouraged. Having a fixed perception on anything is taboo.